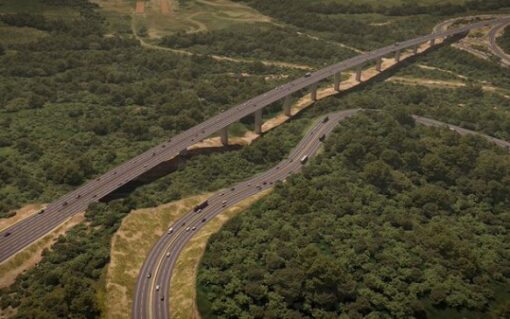 Grupo Puentes has won a major contract worth almost $250 million to design, build and finance the Corredor de las Playas highway in Panama, which is being promoted by the Ministry of Public Works. The award culminates a successful career in the execution of public infrastructures in this Central American country, which began just five years ago. The project consists of widening the La Chorrera-Santa Cruz section of the Playas Corridor, which is part of the Pan-American Highway, to six lanes. Located in the province of West Panama, the current road is the only one that connects the nation’s capital with the inland provinces, with a high intensity of vehicle traffic, which is why it has been decided that the improved road should be elevated, in order to separate local traffic from long-distance traffic.

The section to be built by Grupo Puentes is 7.5 kilometres long. In addition to increasing the number of lanes from four to six, the most important action will be to raise the La Chorrera viaduct, 1,756 metres long and 26.50 metres wide, with 43-metre spans and cemented at depth with 1.5-metre-diameter piles. The Spanish company will also build the La Chorrera interchange, consisting of a large roundabout over the dual carriageway, rehabilitate two pedestrian walkways and install a new one, in addition to other improvements.

The start of the works, for which Grupo Puentes has a completion period of 850 days. The Panamanian Ministry of Public Works has particularly valued the guarantees provided by the Spanish company to speed up construction. The quality and compliance demonstrated by Grupo Puentes in the execution of the Atalaya-Mariato road, Cabuya interchange and Caminos de Santiago and de Mesa projects, with a total value of more than 190 million dollars, also played an important role in the awarding of the contract. 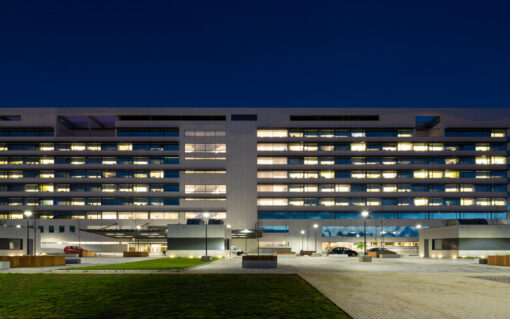 The works consist of the construction of a new hospital building in the Ourense University Hospital Complex, the refurbishment of the current Maternity Hospital, and the improvement of accesses, with a completion period of 40 months. This project is co-financed by European ERDF funds. 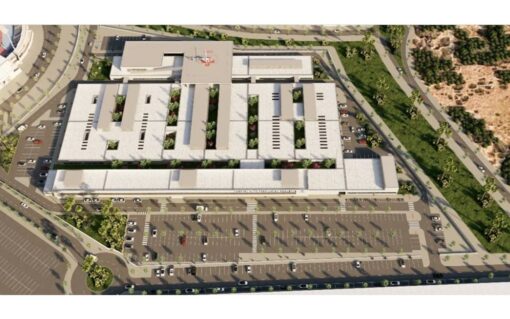 On 12 January, Grupo Puentes began work for the Regional Government of Andalusia on the construction of the High Resolution Hospital in Roquetas de Mar, Almeria, which will be built by 2023.

On a plot of almost 50,000 square metres, the building will occupy an area of 16,300 square metres. This space will house a surgical block, a multi-purpose hospitalisation area, consulting rooms and radiology. It will have four operating theatres, a rehabilitation room, emergency department, radiology service and clinical support area. Patients will have 53 rooms. The centre will also have 27 outpatient consultations and 15 examination rooms. There will be a heliport for urgent patient transfers.

At the official groundbreaking ceremony, the Andalusian president, Juanma Moreno, highlighted the importance of the new hospital. 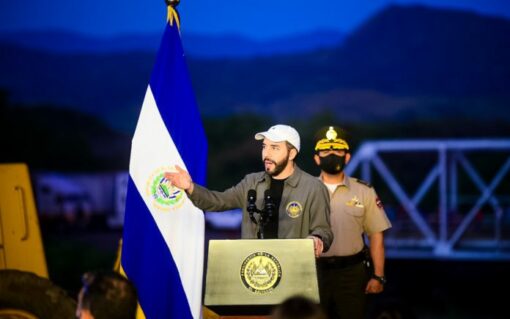 Grupo Puentes has reached a new milestone in public infrastructure in Central America by starting the construction of the longest bridge in El Salvador, called General Manuel José Arce.

Grupo Puentes has reached a new milestone in public infrastructure in Central America by starting the construction of the longest bridge in El Salvador, called General Manuel José Arce. The importance of this event was highlighted by the President of the Republic, Nayib Bukele, who on 25 November laid the first stone, making the start of the works official.

The General Manuel José Arce Bridge will be located at the end of Route CA02W over the Paz River, on the La Hachadura-Pedro de Alvarado border between El Salvador and Guatemala, in the department of Ahuachapán. It will be of great significance in facilitating commercial traffic between the two countries, and will benefit some 400,000 people.

Grupo Puentes is undertaking the project in a joint venture with DISA S.A. The La Hachadura bridge will be 256 metres long, with a span of 160 metres, the longest in El Salvador. It will span the Paz River, with a width of 20.3 metres, enough to accommodate four lanes, two in each direction.

The President of the Republic of El Salvador, Nayib Bukele, travelled to the border point of La Hachadura on 25 November to lay the first stone. At the ceremony he said that “this new bridge, the longest in Salvadoran territory, totally modern, will not only facilitate rapid transit, but will also increase security”. The Salvadoran president added that “this will generate thousands of jobs in economic development and will also be a fundamental pillar for development” 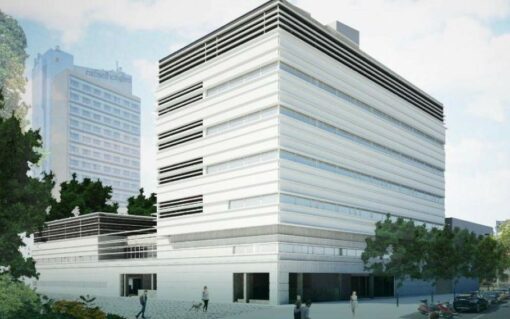 Grupo Puentes awarded the contract for the new Badalona hospital

The Quirónsalud group has awarded Grupo Puentes the construction of a new 15,000 m2 hospital center.

This project will be developed on five floors where 70 rooms, 6 operating rooms and 6 ICU boxes will be located. In addition, this hospital will offer a wide range of services with care in all specialties and multidisciplinary units to provide comprehensive and highly responsive care to patients,

This hospital stands out for its digital and environmentally sustainable development.

It is expected to be operational in 2023. 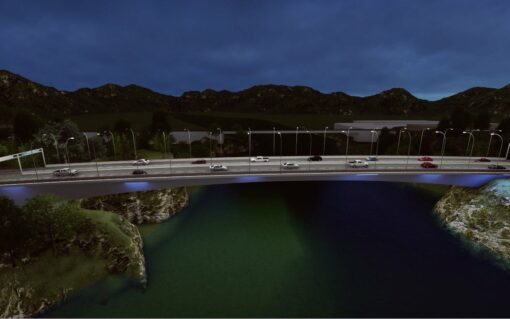 Grupo Puentes, in a joint venture with DISA S.A., will execute the La Hachadura bridge project on the border with Guatemala.
This 160m long bridge will be a national record for span length.
Together with the bridge, a 1.4 km long four-lane road will be built, as well as an interchange, which will help to decongest traffic at the “Kilo 5” in La Hachadura, a strategic commercial and tourist transit point with Guatemala. 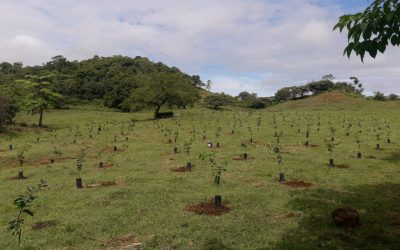 The planting of trees has already begun in order to comply with the ecological compensation established in the contract, whereby 10 trees are planted for each one felled. There will be a total of 12,396 trees of native varieties, both timber (cocobolo, oak and guayacán) and fruit (lemon, cashew, guaba, soursop, tomato and mango).

The plantations will be located in schools, public areas and road easements with a selection of species according to the characteristics of the terrain, and will be maintained for at least 2 years to ensure the survival of all the units. 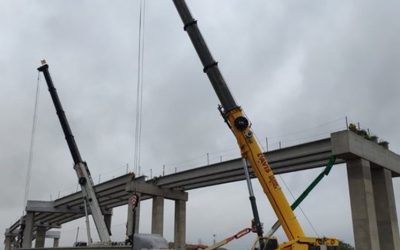 NTE Segments 3 project in Fort Worth, Texas.
Construction of 16 highway bridges with precast concrete girders.
Bridge configurations range from 1 to 22 spans and the total deck slab area is in excess of 400,000 SF (37,000 m²).

Bridges and Roads’ work on the NTE Segments 3 project in Fort Worth, Texas, is progressing rapidly toward completion.
In Segment 3A, Phase 1 construction has been completed in the IH 820 / Mark IV Parkway area, and 4 bridges are now open to traffic.
Construction of Phase 2 has already begun. At the same time, the 3 direct connectors between IH 820 and IH 35W and the U-turn bridge at NE 28th Street are nearing completion, with most of the concrete deck slabs already poured.
On Segment 3C, substructure work on the IH 35W / SH 170 direct connectors is progressing smoothly and on schedule.
At this point, 40% of the substructure has been completed. Girders have already been installed on 8 spans of bridge 106.1 and superstructure work has started. 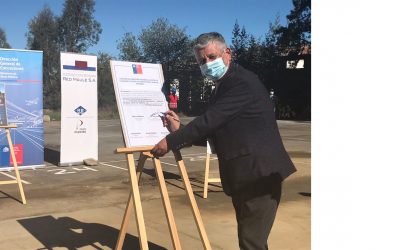 On May 24, 2021, Grupo Puentes received the land associated with the “Red Maule Concession”, which includes the construction and subsequent operation under concession of three hospitals located in the cities of Cauquenes, Constitución and Parral, all of them in the Maule Region of Chile.
The award of this contract, developed by the Ministry of Public Works of Chile, was obtained on March 27, 2021, being awarded to the Ibero-Asian Consortium, formed by the Spanish company Puentes y Calzadas Grupo de Empresas (“Grupo Puentes”) and its parent company China Road and Bridge Corporation (“CRBC”). This is the first project that both companies have bid jointly, having been successfully awarded the contract.
This concession contract considers the design, construction and maintenance of the infrastructure, provision, maintenance and replacement of medical equipment and non-clinical furniture of the three facilities by Sociedad Concesionaria Red Maule S.A. The Concessionaire Company will also be responsible for obtaining all the necessary economic resources to undertake the execution of the construction works and medically equip the hospitals so that the health facilities are operational. 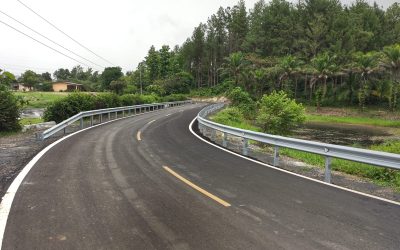 The Atalaya project, in Panama, is progressing according to schedule

The Atalaya-Las Flores and Varadero Branch Road Rehabilitation Project is on schedule and the works are progressing smoothly despite the Covid weather. The work consists mainly of the design and construction of the rehabilitation of the Atalaya-Mariato-Quebro-Las Flores road, which is approximately 102 km long, as well as the Varadero Branch Road, which is approximately 12 km long.